Another day, another dinner. Seafood, my favourite!

Being back in the Middle East means it’s much easier to get hold of things like kingfish and hammour, and certainly for a lot cheaper than in the UK!

I made a basic broth by reducing down homemade chicken stock with ginger, garlic and shallots. To this, I then added: a pinch each of saffron and cumin, some cracked black pepper and a squirt of lemon juice.

I seared the kingfish fillet and prawns in coconut oil, before adding to the broth and leaving to simmer (covered) for about 20 minutes. I then added a local vegetable (suluk), along with cherry tomatoes and fresh coriander, and continued to simmer until they were wilted. I ate this as it was, but my parents had quinoa with it as well, to soak up the broth! 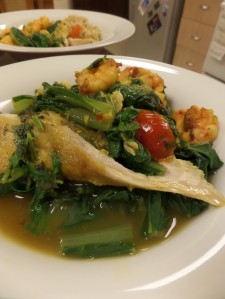